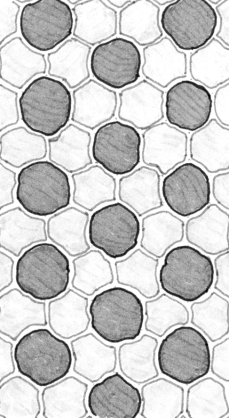 The University of Oregon (UO) is yet again planning to increase tuition, this time by 7% for Oregon residents and 3% for non-residents [1]. The exact number is now set, but when I first started writing this a few months ago it was not, with only a range given of 5-10% for the planned hike for residents. It’s not obvious that anyone should care about rising tuition, for reasons I’ll briefly describe below, but there are some particular characteristics of this new tuition increase and its official explanation that I found interesting.

UO, like most universities, has for many years been raising its tuition at a rate much greater than inflation. Our president announced a few months ago that the increase for next year (2019-2020) will be 3% for non-Oregon-residents and something between 4.6 and 9.7% for residents. Why the range of possibilities? Because of uncertainty about our income from the state. Like most US public universities, we’re not very public — something like 15% of our academic budet comes from the state of Oregon. (I think Oregon’s contribution is ~7% of our overall income, which includes research grants.)

Surprisingly, our university president sent out an email explicitly stating how much the tuition would increase as a function of how much money the state chips in:

This takes a bit of deciphering. The dollar amount is the increase in Oregon funds for higher education, the Public University Support Fund (PUSF), above the previous budget period, for all Oregon public universities. The 2017-2019 PUSF was about $737,000,000 [2], so $100m in the above table means a total of about $837m. I’m not sure what UO’s cut is; more on that in a moment. So in other words, if the state of Oregon increases its total university funding by $100m, from about $740m to $840m, the University of Oregon will raise its in-state tuition by 6.9%.

The striking thing about these numbers, however, emerges when one plots them: 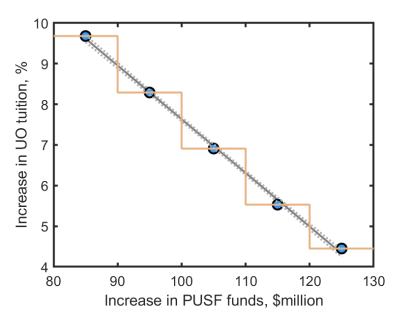 The graph is very linear. (I’ve drawn points at the mid-points of the ranges; the gray line is a linear regression to these.) Each $ 1 million of State of Oregon input negates 0.13% of the increase in tuition.

Why is the linearity of the graph remarkable? It suggests to me that in this range of 4-10% for a tuition increase, demand for a University of Oregon education is very inelastic — if you were going to attend, you’ll attend, undaunted by the tuition increase. If this weren’t the case, we’d expect that the tuition increase would have to grow more than linearly with the drop in state funding, as fewer students would be paying the higher tuition. (I suppose we could instead expect less financial aid to be given, as fewer students need to pay a greater amount to offset the loss of state funds, but this would still be another way of stating that people can pay more than they do.) One could also use the graph to constrain the parameters of a simple model of how enrollment might drop with tuition; the non-linearity of the curve would map onto the drop in students per tuition increment. I started sketching this out, but decided it would be too boring to include. I’ll leave it as an exercise for the reader…

[Added later:] Thinking about the comments below, I’m less sure that my interpretation is the most likely one. It’s not obvious whether the non-linearity of flagging enrollment would show up on this scale and moreover, the University could always keep enrollment constant by lowering admissions criteria. Still, I think my interpretation is plausible, and it also brings up the question of what, if anything, it would take to make enrollment levels stay unchanged.

Of course, the university could be wrong in its projection. Maybe if tuition rises by 8%, many prospective students will balk and not come to UO. However, this inelasticity is consistent with studies at other universities, that I’m sure our administration is aware of, that show that tuition increases hardly affect enrollment [5]. In any case, why would UO make the above table part of its argument to the state for more funding? Oregon already funds higher education less than most states, unfortunately. How does implying that student-derived revenue is a perfect monetary match for state funds, without a cost in number of students served, help the case for more public funding? I am perhaps missing something important; insights are welcome!

I’m not sure what to make of all this. On the one hand, it seems to imply that we should keep pushing the envelope of tuition increases — after all, people can pay it, and we will (ideally) use the money for good purposes: education, outreach, research, and other noble pursuits. (You’ll have to ignore my earlier post that points out that lots of money goes to exorbitant administrator salaries.) On the other hand, even ignoring the inefficiencies of much of higher education, it seems wrong to keep charging ever more, especially when there are a sizable number of students and families who really do struggle to pay. (Next up on the blog queue in fact is a post on my SAIL adventures last week, targeting low-income high school students.) I suppose the path we’ll take is in the middle of the two extremes: going ahead with tuition increases, but not saying too much about what they mean.

Finally, I’ll note for those looking for additional reading, that I highly recommend the short, readable, and free book “Why Are the Prices So Damn High?” by Eric Helland and Alex Tabarrok, which explores the reasons that costs in education, health care, and similar fields have exploded, while the cost of goods has not. (PDF linked here.) I’ll try to comment on this at some point. Also recommended: Brian Caplan’s The Case Against Education: Why the Education System Is a Waste of Time and Money — I disagree with parts of it, but parts are excellent, and given rising costs it should be taken especially seriously.

A draft of an illustration I made of lateral inhibition and the patterning of cell types in developing tissues.

[2] From the Oregon higher education commission: link. There’s lots of interesting stuff in this document.

4 thoughts on “Keep raising the tuition (?)”