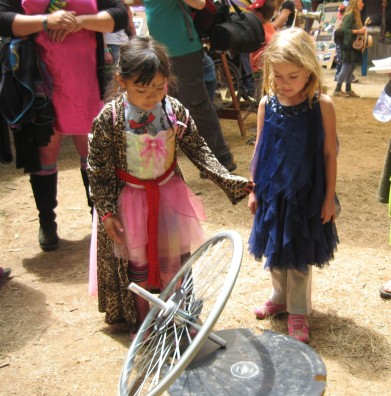 Like last year, several of us from the Physics Department manned a booth at the Oregon Country Fair, the long-running hippie / arts / music / performance / counterculture festival that occurs each year outside Eugene. I worked there today, which was lots of fun. Though our booth was mostly about energy — lots of hands-on demonstrations of converting it between various forms — I spent most of my time with the wheel shown above, spinning it and handing it to passers-by who I enticed to stand on a freely-rotating platform. Via the magic of conservation of angular momentum, tilting the wheel made the person and platform spin, and tilting it the other way induced the opposite rotation. It’s wonderful to feel the wheel “pulling” in different ways, and the demonstration (a classic one) was a huge hit. A few photos: 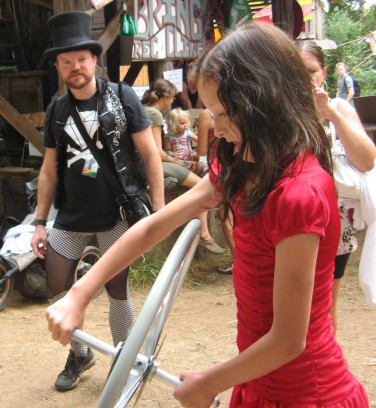 The girl above (“Peace”) spent at least an hour with our energy demos, putting together every combination of circuit imaginable. (She was great!)

In addition to being told that we had the coolest booth at the fair, I was also given the advice in the title of this post — something to keep in mind if the department is looking for some extra cash! (Kidding aside, there would probably be a good amount of demand for science-themed entertainment, at least in Eugene.)

Though everyone loved angular momentum, we ended on a low note, as the wheel caught on and broke a piece off a little girl’s necklace. (She was very sad.) I suppose we can’t make everyone happy…

The day also reminded me of changes being made to the MCAT exam that I learned about a few weeks ago. Short version: a lot of topics are being removed from the list of content that the MCAT will cover, because they’re not particularly useful for being a doctor. One of these that ranked poorly in polls is angular momentum. This makes sense — it’s hard to think of any biological relevance of it, though its importance for other areas of science and technology is profound — but if physics courses for life scientists follow the advice of medical schools, a lot of students will never learn about how something as simple as rotation connects to deep and universal principles of how nature works.