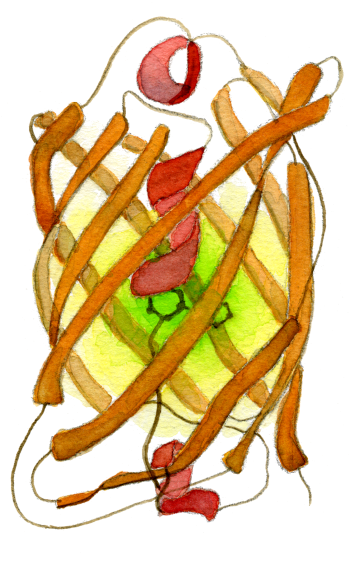 I’ll belatedly conclude a three-part series of posts on useful or interesting readings in biophysics with the shortest list: popular science books. I’ve often thought it unfortunate that there aren’t more books for the general public on biophysics.  The physics underlying the squeezing of DNA into viruses,the crawling through tissues of patrolling immune cells, the patterns that form in a developing embryo, etc., are dramatic and fascinating, and well worth writing about. Besides, does the world really need yet another book about dinosaurs or the Big Bang? Here are a handful of books that are at least somewhat biophysical that come to mind. (There are undoubtedly more that I’m missing.)

Fragile Objects: Soft Matter, Hard Science, and the Thrill of Discovery, by Pierre-Gilles de Gennes and Jacques Badoz (1996). de Gennes won the Nobel Prize in Physics in 1991 for his work on polymer physics, thinking up beautifully simple explanations for the behavior of polymers and other squishy materials. The first half of this book is an excellent exploration of how ink particles stay suspended in liquid, why wet paintbrush bristles stick together, and other everyday topics of considerable depth. It’s not about biophysics per se, but the fields of “soft matter” and biophysics overlap considerably. The second half is an odd discussion of the French educational system. It’s a strange book, and is out of print, but it’s worth finding.

Chaos: Making a New Science, by James Gleick. It’s really a stretch to call this at all biophysical, though parts of it do relate to pattern formation in biological systems, but since it is, in my opinion, the best popular science book I’ve ever read, I’m putting it on the list! Gleick manages to combine accurate descriptions of science, interesting insights into its historical context, and dramatically told stories about the people involved in uncovering chaos.

The Machinery of Life, by David Goodsell. An amazing illustrated survey of the molecules and molecular “machines” that make up cells. It’s more a guide to structural biology — the shapes and forms of biological molecules rather than their physics and dynamics — but is nonetheless worth being on this list. Goodsell’s drawings and paintings are fantastic, e.g.

[from Goodsell Figure 5.6, showing a transport vesicle (green) and a microtubule (B), among other things.]

Many more can be found at his web pages, e.g. http://mgl.scripps.edu/people/goodsell/books/MoL2-preview.html. Be sure to read the newer edition of the book (2009), not the earlier black-and-white one (1993).

Life’s Ratchets, by Peter Hoffmann. I haven’t actually read this one, but I’ve heard good things about it. One of the most remarkable things about life (and many non-living systems also) is its ability to harness energy to order itself, a topic explored here.

The Self-Made Tapestry: Pattern Formation in Nature, by Phillip Ball. Sadly out of print, this book by the prolific and brilliant Phillip Ball deals with pattern formation of all sorts, from the rippling of sand dunes to the dots and stripes of animal coats.

Given the shortage of biophysical popular science books, it has occurred to me to write my own. I’ve sporadically worked on this, in parallel with developing and teaching the biophysics for non-science-majors course I created a few years ago [description, syllabus].  This is why I have random odd illustrations of Green Fluorescent Protein, for example, lying around (at the top of the post). Is it worth working more on this? I’m not sure…