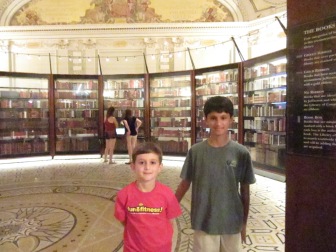 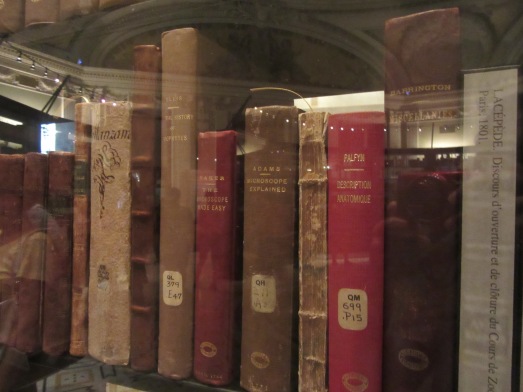 I always start off my “biophysics for non-science majors” class with an interesting picture. Today, since it’s election day, I tried to think of something that links politics and science and came up with these photos that I took at the Library of Congress this past summer, where there’s a reconstruction of Thomas Jefferson’s personal library. Jefferson had a lot of books, spanning an amazing range of topics. There’s a lot of science, including (shown) “The Microscope Made Easy” — presumably the 18th century version of “Microscopy for Dummies.”

It’s remarkable to think that within weeks of taking office as Vice President in 1797, Jefferson presented a paper on paleontology to the American Philosophical Society, describing the bones of an ancient ground sloth [1, 2, 3]. I try to convey to students the idea that science provides a way of looking at the world that can and should be integrated with everything else we do, a perspective that Jefferson and others like him seem to have absorbed very deeply.

(I was thinking of also showing a beautiful paper from Benjamin Franklin about oil films stilling the ripples of ponds, published in the politically tumultuous year of 1774, but I decided not to.)

There’s a lot more one could go into on this topic. Jefferson was a strong advocate for science in the nascent United States, and he enthusiastically promoted the work of others, sometimes in ways that illustrate his tangled treatment of issues of race [1, 2]. I find Thomas Jefferson remarkable and fascinating, and I’ll look forward to lectures on paleontology, or biophysics, from a future president. (Maybe we can borrow Canada’s prime minister?)

One thought on “Election day biophysics”