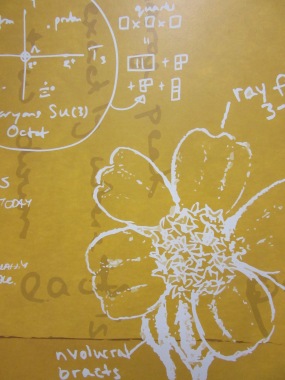 Summary: The background artwork at the café in the new UO Science Library features sketches from UO faculty and student notebooks. If you’re here, go check it out! [Update: Note Eric Johnson’s comment on the sunshades! Update: Lara Nesselroad, below, notes that there is an informational placard next to the artwork!]

The Science Library here at the University of Oregon has just emerged from a renovation that turned a cramped underground facility into a more expansive space that extends into a gorgeous above-ground “social commons.” (For an overview, see this news item.) I was on the user-group committee that met with architects and campus facilities people throughout the design process. The committee was very time consuming, involving for example, hours-long interviews with architectural firms, but it was one of the most fascinating and enjoyable committees I’ve been on. I was consistently impressed by the architects, the campus planners, and my fellow committee members.

An interesting event in this process, near the end, involved the décor of the café that’s housed in the commons space, specifically the background artwork on the walls. The graphic designers suggested a wall of equations, which I thought would be awful because (i) it’s not warm or inviting; (ii) it feeds into misperceptions that equations are magical entities in themselves rather than distillations of underlying concepts. (Certainly everyone who has taught a physics class has experienced students who want to know what particular formula answers a particular question, rather than trying to understand what concepts allow one to construct the relevant equation.); (iii) it’s unlikely to represent the variety of scientific fields; (iv) it’s cliché and generic; and, most importantly, (v) there’s nothing local about it — nothing that is unique to the University of Oregon

So, I suggested an alternative: nearly all scientists make sketches, whether of biological specimens, optical components, or countless other things. Let’s get examples from UO faculty and graduate student notebooks, and make the café background art from this! It gives a better sense of how science actually works, especially in multiple fields; it’s more “human;” and it’s more local, and distinctively Oregonian. I volunteered to organize this, and the idea took flight. I got a great response from emailing faculty in all the science departments, who sent in drawings of neurons, crystal structures, Feynman diagrams, design notes for a sudoku-solving computer program, and more. Here’s a marine invertebrate embryo, from Svetlana Maslakova (Oregon. Inst. for Marine Biology) 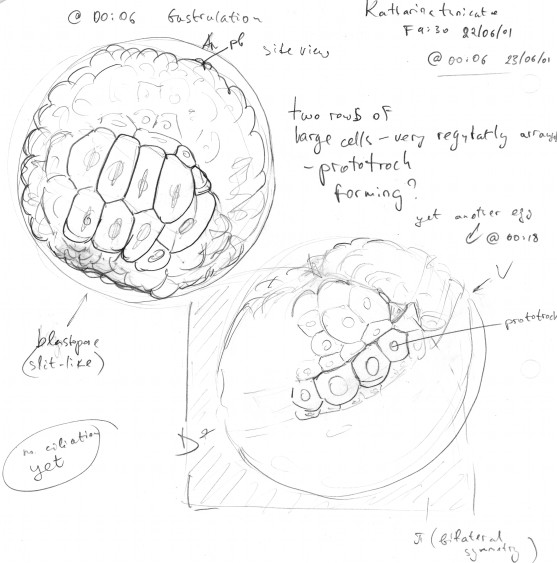 A large subset of these was chosen by the designers for the final wall panels, including two of mine. Here’s one, a cartoon of proteins binding to a membrane and sculpting it into a sphere:

Here’s what the final Science Café wall looks like:

The first photo is from this morning, soon after the building opened for the day. The second is from a week or two ago, and shows some remnants of construction. (There’s also another section, behind the cashier’s spot.)

. There is a placard next to the drawings identifying the UO faculty and students who contributed! (I didn’t notice this despite several visits to the display — thanks to Lara Nesselroad for emailing and commenting about this!) I drew an arrow pointing to it (just on the photo, not on the actual wall):

The placard is heartening, but it would be great for visitors to have an annotated map. Or even better, a touch screen that calls up more information about each item. (There are great panels that do this at the campus Art Museum, for example.)

Given this lack, this post is all you’ve got! Below (after the update), I’ve pasted the list of contributors and brief descriptions of their work. (I’m not certain that it is completely correct in its correspondence to what was picked for the wall.) You can print out the list, take it to the café, and have a neat treasure hunt matching drawings to text!

Update Oct. 21, 2016: See Eric Johnson’s comment about more science-derived art on the library exterior. A photo of it is at the end of this post. 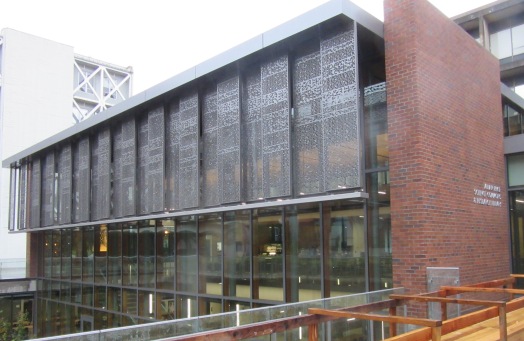