I’ll continue describing a graduate biophysics course I taught in Spring 2015. In Part I, I wrote about the topics we covered. Here, I’ll focus on the structure of the course — books, assignments, in-class activities, and the students’ final project — and note what worked and didn’t work. (What didn’t work: popsicle sticks.) Click for the syllabus.

How does one get there?

As I’ve written before, we are fortunate to live in an age in which there are good biophysics textbooks. Most notably,

The first two are “standard” biophysics texts in that they explore the statistical mechanics, electrostatics, and mechanics of DNA, proteins, membranes, and other cellular components, as well as the interplay of forces that control micro-scale biological interactions. Both are excellent books! I felt it would be useful to have an assigned textbook for the course, both for students to refer to, and to make it easier to have reading assignments that freed class time for more specialized discussions and activities. I chose Nelson’s Biological Physics book, mainly because it is more concise and “linear” in its progression of topics. (I did, however, distribute some excerpts from Physical Biology of the Cell, especially on DNA mechanics.) I was a bit worried that Nelson’s book would be too simple, since it’s geared towards undergraduates as well as graduate students, but this wasn’t a problem. The exercises aimed at graduate students are very good, and the straightforward nature of the book helped us move quickly, and gave us material to build on in class.

Bialek’s book is quite different, focusing on noise and signal processing, and the principles underlying things like gene expression, vision, chemotaxis, etc. I took bits from it, on photon detection in vision and on chemotaxis, which are excellent. Overall, it would be interesting to structure a course around this book, but one would miss out on the “mechanical” aspects of biophysics (DNA rigidity, membrane dynamics, etc.), and also on much of the variety that exists in the cellular world; I think these things are crucial for an introductory biophysics course. I must also point out that Bialek’s book is quite difficult — it takes a lot of thought to follow it, which is certainly fine, but that would place severe constraints on a ten week introductory course.

Physical Models of Living Systems is a fascinating book, and I extracted several pieces of it for the section of the course on “Cellular Circuits” (See Part I.) It would be great to make a course focused solely on the topics of this book, embellishing it with more discussion of experimental methods, but this also would take us away from “central” themes in biophysics. Still, it’s an excellent book. (I was fortunate to read and evaluate it before it came out! It’s nice to see my name in print in the acknowledgements!)

I also made use of various parts of Howard Berg’s classic Random Walks in Biology, on diffusion as well as bacterial strategies for motion (runs and tumbles, etc.).

I assigned weekly problem sets, which were usually a mixture of exercises from Nelson’s book and questions I either wrote myself or took from other sources. For an example, see Homework #4. Several of the problems required writing computer simulations, which is an extremely useful skill to practice. In general, the homework assignments went very well. Students noted, however, that the difficulty and time required were very inconsistent between problem sets. I am not surprised by this.

I wanted to integrate active learning into the class: lecturing as little as possible, since it’s a poor way to convey understanding, and having lots of occasions for students to think and do things in class. I do this a lot in my general-education undergraduate classes, but it’s less common in higher level classes.

Quite often, I asked students, either on their own or in a group of two or three, to figure out something that would either lead into a more detailed analysis, or that would in itself illustrate the implications of some physical concept. As an example of the former, we examined how fluorescent correlation spectroscopy (FCS), which measures the intensity fluctuations that result as fluorescent molecules diffuse in and out of microscope’s focal volume, can yield the diffusion coefficient of the molecule. Lazily pasting a sketch: 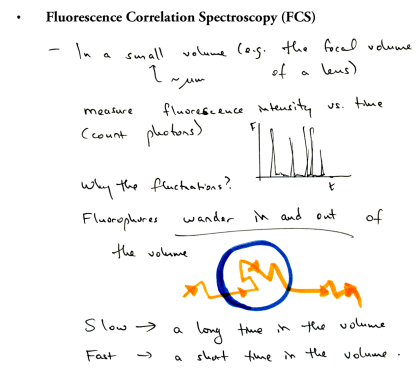 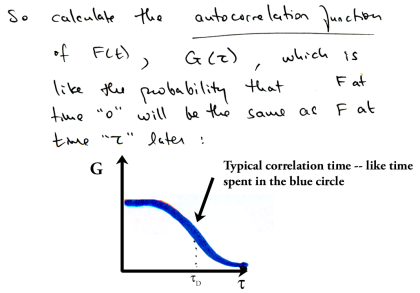 Ignoring uninteresting numerical factors, we can figure out how the characteristic features of the autocorrelation curve (g(𝜏)), namely the value of g(0) and the location of the inflection point, depend on things like the concentration of molecules, the focal volume, and the molecules’ diffusion coefficient. So, I asked students to do this, which went quite well. Then, I went through the derivation of the exact expression for g(𝜏) — a long slog, which strengthened my resolve not to fill our class time with tedious and unenlightening things like this.

More interesting, and somewhat related, examples came from our investigations of the physical constraints on bacterial chemotaxis. If we consider a bacterium capturing nutrients that surround it at some mean concentration c_0, and “measuring” the number it has acquired over time t_m, how accurately can it measure c_0? This is an important question, since the bacterium will “want” to migrate to regions of higher nutrient concentration, and so will need to know whether a perceived increase in food abundance is real, or just a statistical fluctuation due to the randomness of diffusion. I asked students to figure this out, which not only helped really cement ideas of noise and fluctuations — more so than just hearing me state them — and also led to more interesting questions like: since the measurement accuracy increases with increasing t_m, why shouldn’t the bacterium just increase t_m arbitrarily? What physical limits constrain the measurement time?

We discussed a lot of contemporary papers in class. Just to give a few examples: after covering FCS above, we looked at a remarkable paper from Carlos Bustamante’s group in which the authors measured the enhanced diffusion of an enzyme due to the heat released from its chemical activity. We spent quite a while discussing experiments from Kazuhiko Kinosita’s group on the workings of ATP synthase, a fascinating rotary molecular motor (e.g. this and this), which involved questions like “How can we relate the observed motion of objects attached to the protein complex to the work done by the complex?” and “”How close is ATP synthase’s performance to fundamental thermodynamic limits on machines?” We looked at several examples of cellular circuits, including one that relates to my lab’s interests in gut microbial activities. In general, using class time to discuss contemporary research went very well, both in terms of being interesting in itself, and for illustrating the connection between topics of the course and actual research activity.

I also had students read and briefly comment on sections of the textbook, or other readings, in class. This not only freed class time — i.e. not having to examine in detail things that are well-explained elsewhere — but also gave me a good sense of how well students understood things. In retrospect, I should have done more of this. I didn’t in part because it takes a good amount of advance planning to map out exactly what students should present on, and in part because I was perhaps too used to lower-level undergraduate courses in which students don’t do very well with exercises that require independent reading and thinking. It was very liberating to teach a graduate course — all the students actually read and think!

Overall, designing the course to be very active was great — I think students learned a lot, and it made the course lively and fun to teach. I would definitely run the class similarly the next time I teach it.

The one major failure of my active learning approach was my tactic for getting a variety of voices in-class: writing each student’s name on a popsicle stick, and picking a stick at random to call on someone to answer a question. I took this idea from an activity I did last year with my older son’s fourth grade class where it worked wonderfully. Here, however, it was a disaster. Despite everyone in principle accepting the idea that it’s fine to say wrong things, or respond to questions with further questions about what’s unclear, students really didn’t like being put on the spot by random forces. I distributed a mid-term evaluation to get feedback on how the course was going; the feedback was very positive with the near-universal exception of the popsicle sticks! I acquiesced, therefore, and got rid of them. I’m not completely happy with this — without the random selection, some of the quieter students very rarely spoke up, and it would have probably helped them, unpleasant though it may be, to practice being more outspoken.

The students each did a final project, for which my goals were that they

In other words: I wanted students to build on their understanding of the topic of biophysics, but also enhance their understanding of how biophysics progresses. Each student gave a 15 minute (+ questions) presentation in class that covered the background of their chosen topic, a statement of something unknown plus reasons to care that it should be understood, and the experimental design of a study to investigate it.

This was asking a lot. It went fairly well, but there is considerable room for improvement. Not surprisingly, student’s coverage of the background science was generally good. The topics chosen included embolisms in the xylem of plants, bacteriophages and human diseases, ways of modeling actin networks, and more. In retrospect, we should have spent much more time iteratively working on plans for hypothetical future experiments, critiquing methods and their potential outcomes. Planning experiments is very difficult! It’s hard to really do this well in a ten week course, however; we only started dealing with the final projects with a few weeks to go in the term. Still, overall, the projects were enjoyable to listen to, and I think people learned quite a bit from them.

As mentioned in Part I, I consider the course overall a great success. It took a lot of work to put together, but it was very enjoyable and stimulating to teach, and students liked it a lot. I’m not teaching it in 2015-16 — it’s rare here to offer graduate electives in consecutive years — but I expect that I’ll teach it again in the near future. For anyone else thinking of teaching a similar course: I’m happy to share any of my materials, including about 90 pages of notes on the day-to-day content of the class.

When designing the course, one thing I had worried about was whether, given the breadth of biophysics and the variety of topics we’d be exploring, the subject would be seen as having any overall coherence. It’s not obvious, even to biophysicists, that it does. It was satisfying to see that the course did indeed hold together — that the themes of biological materials interacting via physical forces, quantitative analyses of dynamical systems, and the overarching roles of statistical mechanics and random process really did tie the class together.

Today’s illustration is again a painting based on a photo from Owls by Marianne Taylor.

2 thoughts on “Recap of a graduate biophysics course — Part II”